"WHAT WE DO IN LIFE, ECHOS IN  ETERNITY" 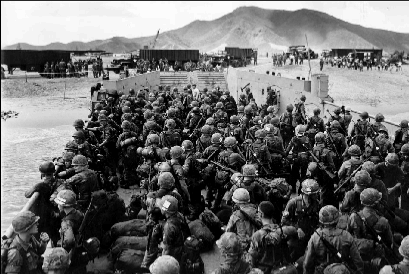 
With those simple words, President Johnson announced to the world the deployment for which the division had prepared since its inception. On 16 August, the 1st Cavalry Division set sail from Charleston, South Carolina.

That same day, the  66th Regiment of the People's Army departed from their base camp along the Ho Chi Minh Trail.

On 1 November, as lead elements of the 66th Regiment crossed into South Vietnam using trails that followed the Ia Drang River, the 1st Cavalry Division's Recon elements and the  1st Brigade (the only Airborne brigade of the 1st Cavalry Division) captured the North Vietnamese 33 rd Regiment's field hospital 8 miles west of Plei Me. On that same day Delta Company Recon platoon engaged lead North Vietnamese elements  in a vicious fire fight that resulted in three KIA and numerous wounded from Delta Company.

This was the first encounter with the NVA and resulted in providing intelligence which was then acted upon by the Division. On 12 November, Brigadier General Richard T. Knowles, the assistant division commander, ordered 3rd Brigade to conduct an air assault operation near the heart of a suspected enemy base camp on the Chu Pong Massif above the Ia Drang valley.  This precipitated the famous battle of the Ia Drang Valley, perhaps the largest battle of the Vietnam War. The rest is history. But as often was the case, we were the first to find the enemy.  We and the rest of the Division caused the North Vietnamese to abandon their initial strategy of cutting South Vietnam in half at the Central Highlands.

The "Cav" became the "go to" Division in Vietnam.  Over half of all enemy casualties were credited to the 1st Cavalry Division, but not without a price.  The 1st Cav had more Troopers killed than any other Division.  With this intense fighting, Delta Company participated in every major operation, from the rescue of the Marines in Khe Sanh, the disruption of the NVA attack on Quan Tri, the A Shau Valley,  the Incursion of Cambodia, and many operations  to numerous to list.  But Delta had major actions in all parts of Vietnam, usually when real fire-power was needed by the "Stars" who ran the war.

Most of us were barely out of high school six months prior to our arrival in Vietnam.  Fortunately, we had Officers and NCOs who had excellent training and experience; some saw combat during earlier wars, some Ranger school, some Recondo,  all Airborne at the beginning.  As time passed, many NCO's were on their second tour in Vietnam. From them we learned what it took to complete our many missions and to survive.  Without good leadership, fewer of us would have made it home.  But nothing is perfect. War is a high risk business and we accepted those risks with bravery and determination.

We looked into the face of death many times. Sometimes we saw it in our dead friends, sometimes in our enemy, but death followed us everywhere. And sometimes we followed it. On every helicopter air assault it lurked.  At every river crossing, at every bend in the trail, behind every bush, in every village, at Chu Pong, at Happy Valley, at Bong Son and A Shau, death lurked.  Many of us who are alive today were wounded.  Many of us had malaria.

We "humped" the mountains, the jungle,and the rice paddies through horrible conditions, popping salt tablets to stop heat stroke in 118 degree temperatures, and  shivered in the cold  high altitude of the monsoon soaked mountains.  We slept in mud puddled holes dug at night for safety, and in trees like other primates, to avoid the leaches that incessantly stalked our blood.  We ate C's all the time. A "happy meal" was a saved can of pound cake and fruit cocktail with maybe a cigarette to top it off. There was no such thing as a "good nights sleep".

Helicopters became as much a part of our lives as a horse was to a cavalry trooper of old.  That very mobility enabled us to constantly stay close to the enemy. So we could never relax. We developed the heightened senses of jungle animals, acutely aware of unusual sights, sounds, and smells which might indicate a threat. We completed hundreds of air assaults, all into unknown areas, all with the possibility, and at times the reality, of a "Hot LZ".  Some of us died.  All of us lost friends who we grew to love in a way that only combat veterans can understand. But we did it all together, trusting one another with our lives.

Then, after what  for most of us was the most intense experience of our lives, we suddenly got on a plane and went home.  We dispersed and went back to the world, leaving Vietnam physically;  but never really leaving it entirely behind.

It is now the time, in our more advanced years, to reflect back with deserved pride.  We did make the "impossible routine" .  We had experiences that most  people can not even imagine; and we now look back a little incredulously, wondering how we did it, but knowing that deep within us was the strength and courage to summon that airborne spirit which never gives up.  We lived through a special kind of hell and formed strong bonds with one another because of it.

It is the purpose of this web site to provide a catalyst  for thinking about, and perhaps celebrating, the daily accomplishments of what we did there in our youth.  Nostalgia is a luxury meant to be enjoyed.  Let's remember our friends and honor them together: "All the Way".

Sept 20, 1965 USS Geiger arrived at Qui Nhon. Each Company drew straws to see who would be given the privilege of " first to go ashore".   The troops then unloaded from a landing craft where they met the assistant Division Commander, Brigadier  General John M. Wright, waiting on the beach. From there we  were transported by chopper and truck to An Khe.
Some of the advanced party arrived earlier on the USS Alexander Patch.

This was the Delta Company headquarters tent, set up soon after arrival at An Khe in 1965.  Here we see SSG Hofmister and Sgt Oyler holding the sign the first day it adorned the company area. (Click to Enlarge)

* This web site includes anyone who was in Delta 1/12th in Vietnam at any time.

All who served in Delta are brothers-in-arms and share the same Delta Company culture.  This is forcefully attested  by a review of  KIA lists, as well as the awards and decorations given to personnel from D Company, 1/12th. Three awards of the Medal of Honor were given to members of Delta Company 1/12th Cav. in Vietnam  (Click on Links below to view the Medal of Honor info on these men.) Four awards of the Distinguished Service Cross were given to Delta members.  This is extraordinary for this size unit.  Delta Company 1/12th earned more high level awards than any Company in the history of the First Cavalry Division, in any war.
We continue to document our history and seek stories, data, and photos that YOU MAY HAVE.  Contact the Webmaster at: delta@cattrack6india.com

View my Guestbook
Free Guestbooks by Bravenet.com
Click here for a complete description of the logistics challenge of Deployment of the 1st Cavalry Division (Airmobile), 25 August - 20 September 1965 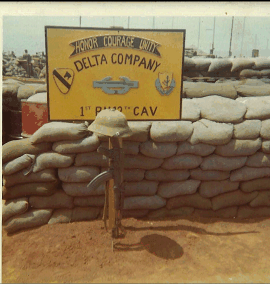 This was the Delta Company headquarters entrance in late 1969.
Located in III Core. Note the excellent Motto, which applies perpetually. (Click to Enlarge) 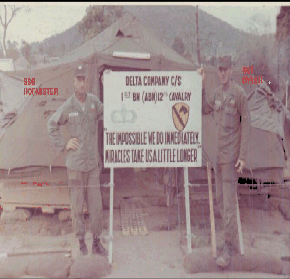 2023 Division Reunion:  See page 2 of the latest Newsletter (above)